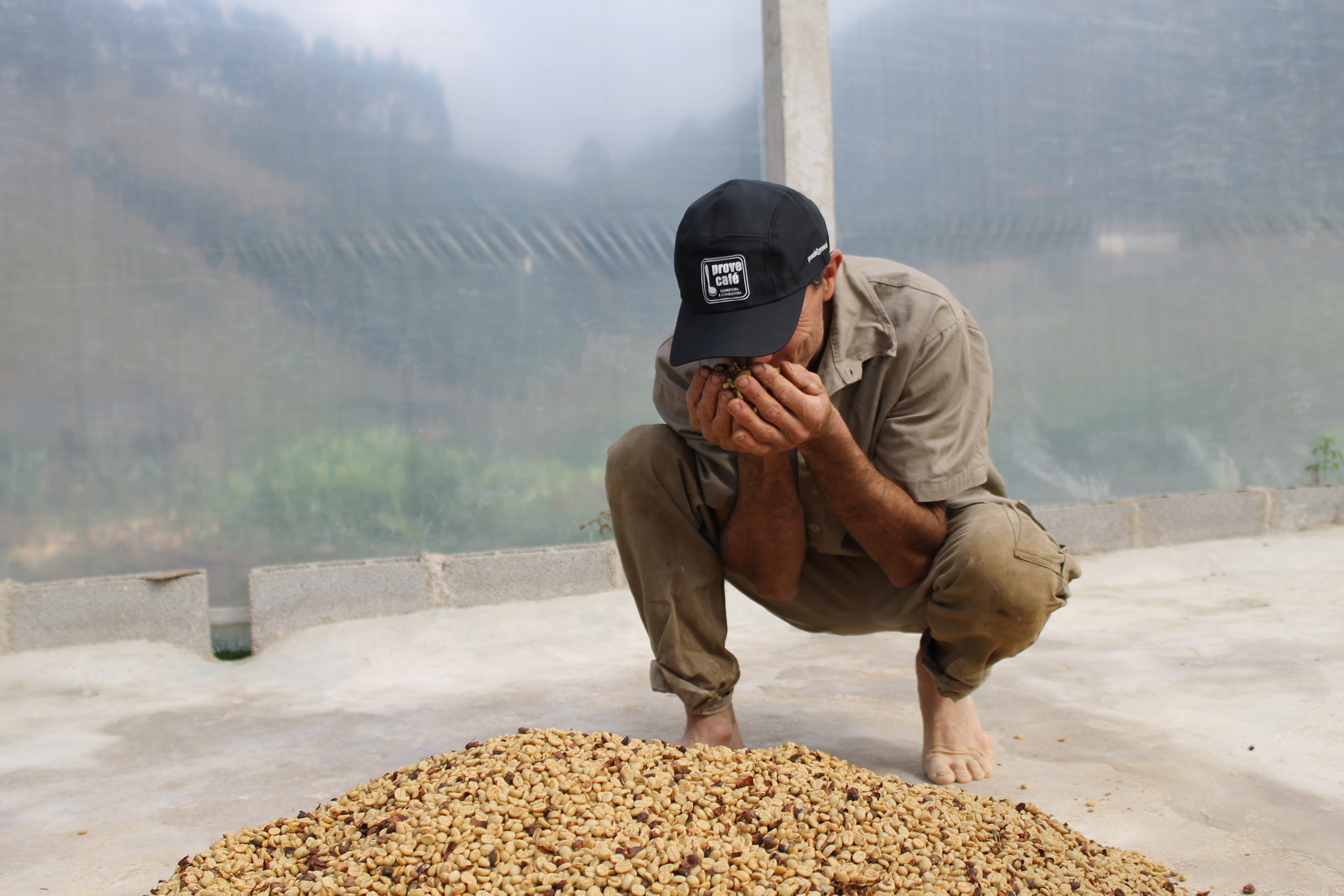 The lands of Sitio Tomazini are in the Bateia Community and were bought more than 60 years ago by Valdeir Dalcin Tomazini’s father. Valdeir was born there and learned how to grow coffee from his father. In the beginning of the farm, Valdeir’s father planted beans and only years later started growing coffee.

The history of the family demonstrates much courage, as they were one of the first six families to clear the forest and settle there, giving rise to the Community in 1902. The Community was created by immigrants coming from Europe and is today a great producer of quality coffees. Family patriarch, Tomas Tomazini, is responsible for this story. Despite the challenging climate for coffee at the time, he insisted on growing it.

To rise to the challenge and manage to plant coffee on his lands, Tomas made a promise to an Italian saint, Our Lady of Caravaggio. When the promise was fulfilled, he gathered help within the community to bring an image of the saint to Brazil. And today the day of the patron saint is celebrated on May 26. It is an event that unites the entire community.
The Tomazini family history is intertwined with the history of the coffee-producing community, as are the stories of other families that settled there at the beginning of last century.

In 1995, Valdeir married Maria da Penha, who came from the town of Apeninos. The couple met when Maria’s family moved to Bateia. Maria is also from a family of small coffee producers. Because of this, the two were willing to build their life around coffee cultivation.
But the changes in production only began in 2002 when Valdeir’s cousin, Cleziomar, began to rest his coffee. Cleuziomar had inherited the curious and trailblazing spirit of the Tomazini family and was one of the first in the region to bet on pulped natural coffee.

The cousin was innovative in the manner of handling coffee in the region, elevating the quality of the coffee to specialty. Valdeir followed in his footsteps and one year later invested in his own huller and in covered patios to protect the coffee from humidity.
At the same time, he separated floaters from demuscilated coffees and won his first state quality competition with a pulped natural red and yellow catucaí. Since then, he has collected awards around the country due to the distinct floral and fruity aromas of his coffees that are found today in coffee shops throughout the country and around the world.

The family has been doing tests of fermentation in biological boxes with controlled immersion times with the goal of obtaining more exotic coffees. His son, Abner, 21, has been running these tests and taking care of the coffee on the patio. He studied to be an agricultural technician and insists on doing soil and leaf analyses for the family’s crops.
Valdeir is proud to say that his son is the only one in the region who works with his parents. He’d like to see this of other youths in the community so that the quality of coffees coming from there would continue for many long years.

The farm has three springs, 2.5 hectares of preserved Atlantic Forest and 13 of crops and pastures. The family also grows corn, beans and yams.